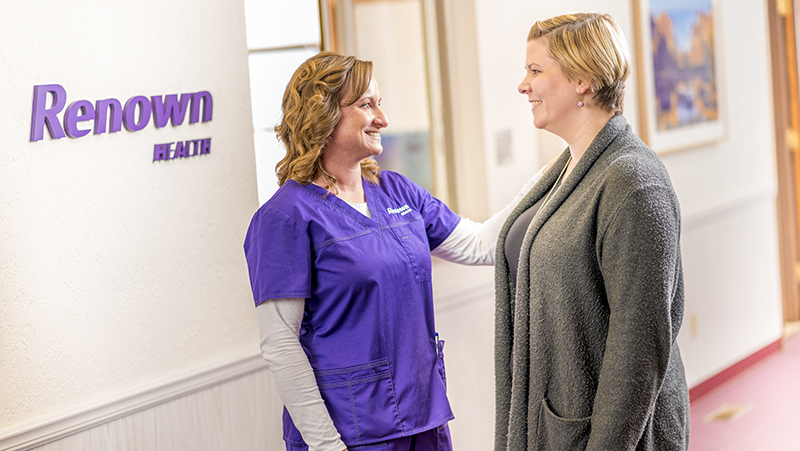 A panel of judges including We C.A.R.E. master trainers from across the network reviewed all recently submitted stories about how employees are implementing We C.A.R.E. service behaviors as Renown’s cultural compass.

The following three submissions were selected as the winning stories:

We C.A.R.E. behavior the story showcases: I stay off my cell phone while in meetings and “on-stage” areas.

“As he was entering the hospital for his shift via the Second Street entrance on Aug. 20, Victor Olivera noticed a woman lying on the ground near the entrance doors. No one was around, and it was unknown how long she had been there. He stopped to check on the woman, who was not conscious, called the emergency extension and activated the code blue team. The woman’s husband arrived moments later and Victor reassured him that the team was on the way to assist her. The team arrived almost immediately after her husband and assisted the woman.

Victor stated he was even more aware of his surroundings and makes an effort to stay off of his phone in on-stage areas thanks to We C.A.R.E. training. He stated that if he had been on his phone, or if anyone had been on their phone, there was no way the woman would have been seen due to where she was lying. Victor has demonstrated the very core of our Mission, Vision, and Values by making a difference and possibly saving a life.”

We C.A.R.E. behavior the story showcases: Anticipate Needs and Connect with Compassion.

“While rounding through our department, I noticed a very quiet patient in our fluoroscopy room. I asked the tech, who was outside the room, how her day was going and she mentioned that she felt the patient was kind of shut off. I went into the room and the patient’s head was turned away from me. I addressed the patient by his name and without turning to look at me, he just answered, ‘Yes.’

I asked if he was getting everything that he needed and he just said, ‘Yes.’ I could hear an accent and thought that he might be from the West Coast. He turned and looked right at me and said, ‘Why yes, I am.’ We started talking about how he ended up in the West and I found out that he was the only living serviceman that had served in all four branches of the military – very impressive. I thanked him for his service and thanked him for sharing his story with me.

The radiologist that day happened to be military trained, so I told him about the patient and the exam was completely different. The radiologist and patient were like old friends and the patient perked up and engaged with everyone. It was nice to see what a little conversation could do.”

“One of our long-stay patients on GSU has fallen multiple times and has been aggressive, so the team really pulled together to come up with ideas on how to keep him and the team safe. We simply talked to him to make connections and learned as much about him as possible.

First, they learned that he enjoyed playing the guitar, so one RN brought in a guitar for him. Some music was played for him and other times he would play it for the nurses. From there, the team learned that he especially loves rock music. At appropriate times, the team would set him up at the nursing station with an extra available workstation on wheels and play music for him. He would watch the videos and listen to the music, and we started to see more of who he was. He started to communicate socially, smile and laugh. He really enjoys telling us who his favorite musicians are and why.

His behavior has significantly improved since he first arrived to our unit; he says hello when we walk by and is not as impulsive as he once was. Seeing how impactful this was on his demeanor, the team decided that they would give him an iPod with lots of rock music on it, so when he discharged he would have his favorite music and it would help him heal. Many staff donated Apple Music gift cards, headphones and the iPod. The team went above and beyond and collaborated together to improve the quality of life for this patient.”