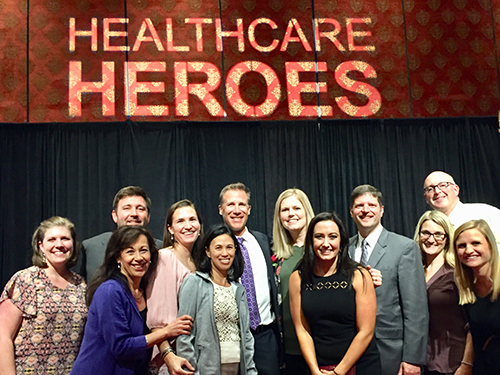 Dr. Beenfeldt poses with others from Renown who attended the recent Healthcare Heroes ceremony

Nevada Business magazine also published a story that honors Dr. Beenfeldt’s work and you can read it here or below:

Even with the tremendous responsibilities of clinical and operational decision-making for the 18 location, 90 provider primary care group of Renown Health, Dr. Derek Beenfeldt remains dedicated to his patients. His compassion was evidenced even prior to medical school when he volunteered in palliative care at a Department of Veterans Affairs (VA) hospital and with Circle of Life Hospice. As a medical student, family medicine resident and primary care physician, his commitment has grown to include the care of large numbers of patients in the Northern Nevada region.

Prior to medical school, Dr. Beenfeldt was a practicing attorney in Reno. His leadership skills were evident early on when he was the student body president at the University of Nevada, Reno. Later he assumed leadership roles at the University as well as the School of Medicines’ family medicine residency. Currently he leads as a primary care physician in the Renown Health Medical Group.

He joined the group in 2014 and, last year, was appointed chief of primary care and charged with overseeing quality, patient satisfaction and access to all locations within the system. He developed and implemented the Primary Care Model, which has become the model for the system population health strategy, of which he leads.

In addition to his roles as physician and chief of primary care, Dr. Beenfeldt remains active in community organizations and donates freely of his time and talent to serve the Northern Nevada community.​