Labor and Delivery Nurses Jump Into Action Outside the Delivery Room 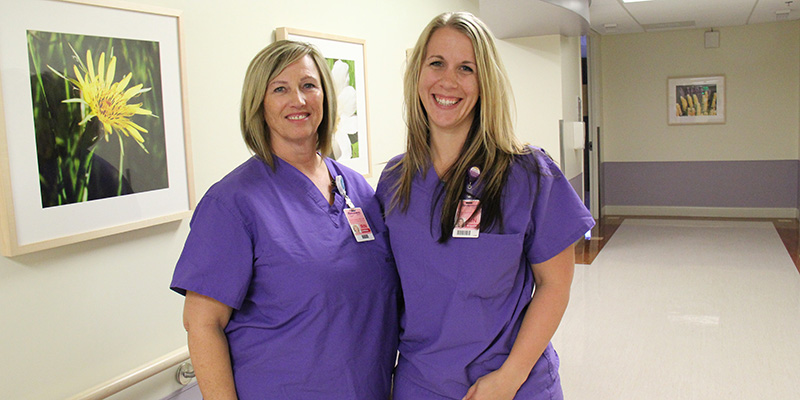 Debbie (left) and Krystie have a combined 35 years of experience working on the Labor and Delivery unit.

It was almost the end of shift for registered nurses Krystie and Debbie. They were giving a report out to the night shift nurse supervisor, Melissa on the Labor and Delivery unit, when she received a phone call on her work phone.

“We watched her face as she took this phone call,” Debbie recalls. “Melissa was like, ‘What? What do you mean a patient is delivering? Where?’ and then she hung up the phone and said, ‘There was a patient coming into a doorway somewhere and she’s delivering.'”

There was no information as to which doorway at Renown Regional the patient was delivering at, and with dozens of doorways and entrances on the campus, Krystie and Debbie went down to the ground floor to see if they could possibly find the woman who was in labor.

Then, a code blue was called for the Roseview Tower elevators, ground floor.

A late September rain drizzled outside while the mother was lying on the floor mat of the entryway – the automatic doors were opening and closing with all the code blue team members around her setting off the door’s sensor. Krystie checked the mother and the baby was already crowning, so there was no time to move her to the Labor and Delivery unit.

“I was mainly focused on talking to the mom and ignoring everyone else around me,” Krystie said. “I wanted to make sure that she stayed really calm and coached her through it.”

Being in such a public area, the code blue team worked together to divert visitors and put up screens around the mother to make it as private as possible.

Both Krystie and Debbie have delivered babies off the Labor and Delivery floor, in cars and in the Emergency Department, but in their combined 35 years of experience, neither had delivered a baby in a doorway.

“We’ve been trained to deliver babies, so it’s nothing really scary,” Krystie said. “It’s fun to do deliveries outside of the norm.”

Both mother and baby were healthy and once they could safely move them, they transported them to Labor and Delivery.

“It was almost a surreal moment,” Debbie said. “We got her up on a gurney and I carried the baby all the way up while Krystie, Beth and Melissa wheeled the mom up, and we felt such a sense of accomplishment that we got it done and things were great.”